…if I could afford to live that far from my free babysitter (aka The Grandma).

Today was “Mother Daughter Hippy Day”, a new tradition I just started. Together we left the boonies behind and traveled an hour to reach the liberal bubble where I was born and raised until 2nd grade (and where I also work at the hospital) . Despite the fact that the rain spoiled our plans to play in the park, we had a truly nice hippy experience.

First, we attended the local library’s free sensation stations event, where toddlers are let loose among dozens of bins that are filled with different edible sensory themes, like brown sugar with teacups and pots, wheat germ with bulldozer trucks, dyed blue white sugar with froggies and lily pads, or colorful sprinkles with ice cream scoops and cones.

We wandered into a children’s boutique I had never been to before but being the hippiest of areas in a hippy city (think very small-scale SF), I wasn’t surprised to find that I was in the mecca of all things 100% organic cotton, baby-wearing, and cloth-diapering. The clothing was so cute, but at $35+ for one shirt, way out of my price range. They did have some things for sale, and so I bought an ultra soft, ultra organic pair of jammies with a button-flap bottom and no feet. These jammies are supposedly made by happy factory workers who live in sunshine-filled meadows, spun from cotton that has never touched a chemical. In any case, at under $20, I was sure I’d never see them that cheap again.

Jo Jo loves the big, bulky teething bead necklaces right now… but I couldn’t see spending $30 on them when they might make her happy for about a month. I am also too paranoid about choking, and not trendy enough, to get her the amber teething necklaces that every other kid in this area wears. We settled for an amber teething bracelet, because it was much cheaper, and because she likes wearing bracelets. It does look very adorable (see below photo).

We then went to the people’s co-op, where food is shipped in fresh from the rainbow-strewn countryside, coffee is always fair-trade, and most people are wearing dyed linen pants. We ate organic brown rice, lentils, and kale. Ok I ate that and Jo Jo ate curried peanut rice and an astounding amount of strawberry banana smoothie. After I filled up my recycled to-go cup with coffee, we bought avacados, bananas, and whole milk from the co-op market. It was surprisingly just as affordable as the usual grocery store, probably because their membership almost equals the number of residents in the city.

It began to rain hard, so our plans to hit the playground where I’d strategically parked my car were foiled, and the fresh groceries meant I also wasn’t going to hit the new-age book store (where I’d have to keep my child in my arms 100% of the time so she doesn’t break any goddess statues or swallow any magickal crystals), but I still considered our first hippy outing to be a success.

As we walked through residential neighborhoods where grassy lawns are eschewed in favor of wildflower and rock gardens, I thought about how much I would like to live there, buy groceries from the co-op or twice weekly farmer markets that are just around the corner, visit the library several times a week for their free playgroups and learning activities, and take advantage of the small schools that have the most ethnically diverse classrooms I’ve ever seen, not to mention many many gay and adoptive families. (My niece went to one of these elementaries… she was Nepali, and her classrooms were part White american, part Japanese, part Korean, part Chinese, part Indian, part Pakistani, part Turkish, part Ethiopian, part French, etc etc and so on. I don’t think there was more than two or three kids in each classroom that shared the same ethnic background or country of origin!) 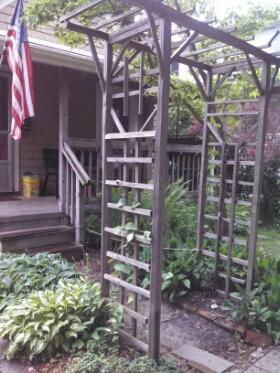 But, here we are, way out in another county, surrounded by natural beauty, to be sure, but also surrounded by a 90% white, conservative Christian, non-recycling, uneducated population (not so much judgment as fact, my county is impoverished and of those who do attend or graduate from any type of education, few return to the area). Many people are nice and have good hearts, but most are quite oblivious to the fact that other cultures exist or should exist. Or maybe it’s just that I, like most people, want to cloister myself in with others who are like-minded and share my personal beliefs and values.

Certainly it will be a challenge of sorts, raising an adopted daughter who is racially different, as a gay mom, in this area. I sometimes wish that I could fill her early years with diversity the way mine were as a young child in hippyville. On the other hand, I will never be able to afford the crunchy lifestyle of the neighborhood I was walking through. I can’t afford the childcare I’d need, or the city taxes, nor the property prices, even with what I’d gain back in gas/car/insurance money.

I absolutely plan to incorporate elements of the lifestyle into my household, however. Buying eggs from local farms, bread from the local Amish community, and vegetables from the market down the road for one… but also turning the newly fenced in entrance to my cottage into a lovely perennial garden!