Recipe for feeling better about life: hang out with your little sister (bahini, in Nepali), order chinese take-out, drink beer, and watch your niece have as many melt downs as your daughter. M and I were both excited to finally hang out with my sister and niece again, and the girls both played/fought all day while my sister inspired me to be the peaceful parent I’ve strove to be all along with her calm responses to irrational preschool/kindergartner behavior. And honestly, being reminded that my kid isn’t the only one experiencing extreme emotions and awful behavior was just comforting. Solidarity. 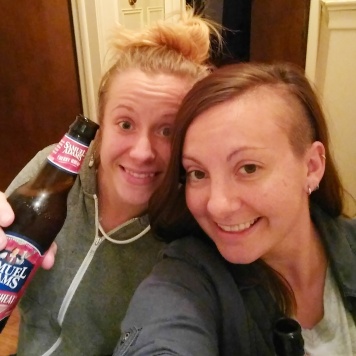 The hardest part about leaving Michigan will be not being able to hang with my sister on a weekly basis. So instead we’ll be making regular trips and staying with them for like a week. Squeeze in the quality time!

If anyone is more upset about the results of the US election than me, it’s my sister. We probably should be sick of politics but this isn’t something we can just turn off. We can’t just go about our regular lives when we just watched half of the country “put aside” or vote for outright bigotry and idiocy. We can’t stop talking about it because people like Pence, Gingrich, Giuliani, Bannon (and on and on) are being given power over our laws and policies, and are backed by a GOP house and senate. Scary shit. And yes, I’m someone who will “unfriend” you, or think differently about you, if you voted for this shit because it’s not “just politics”. It’s my life. It’s eliminating tax credits that directly affect my bank account as a single mom. It’s calling my daughter’s biological relatives “rapists”. It’s bragging about sexual assault and being rewarded for it. It’s having those things NOT be a deal breaker for you cause you don’t like some policies or the history of Hillary Clinton.

Disgusting. Repugnant. Unacceptable. If you don’t agree with me that those things are unacceptable no matter what, then we aren’t friends. No. We aren’t.

Anywho, if I do start a nursing contract too early to go back to Nepal, I’d like to swing by either the million woman march or the protests in DC near inauguration day, or the pipeline protests out west… that would be very awesome. I’d like to do something, rather than just complain about everything.

3 thoughts on “I just needed my “bahini””